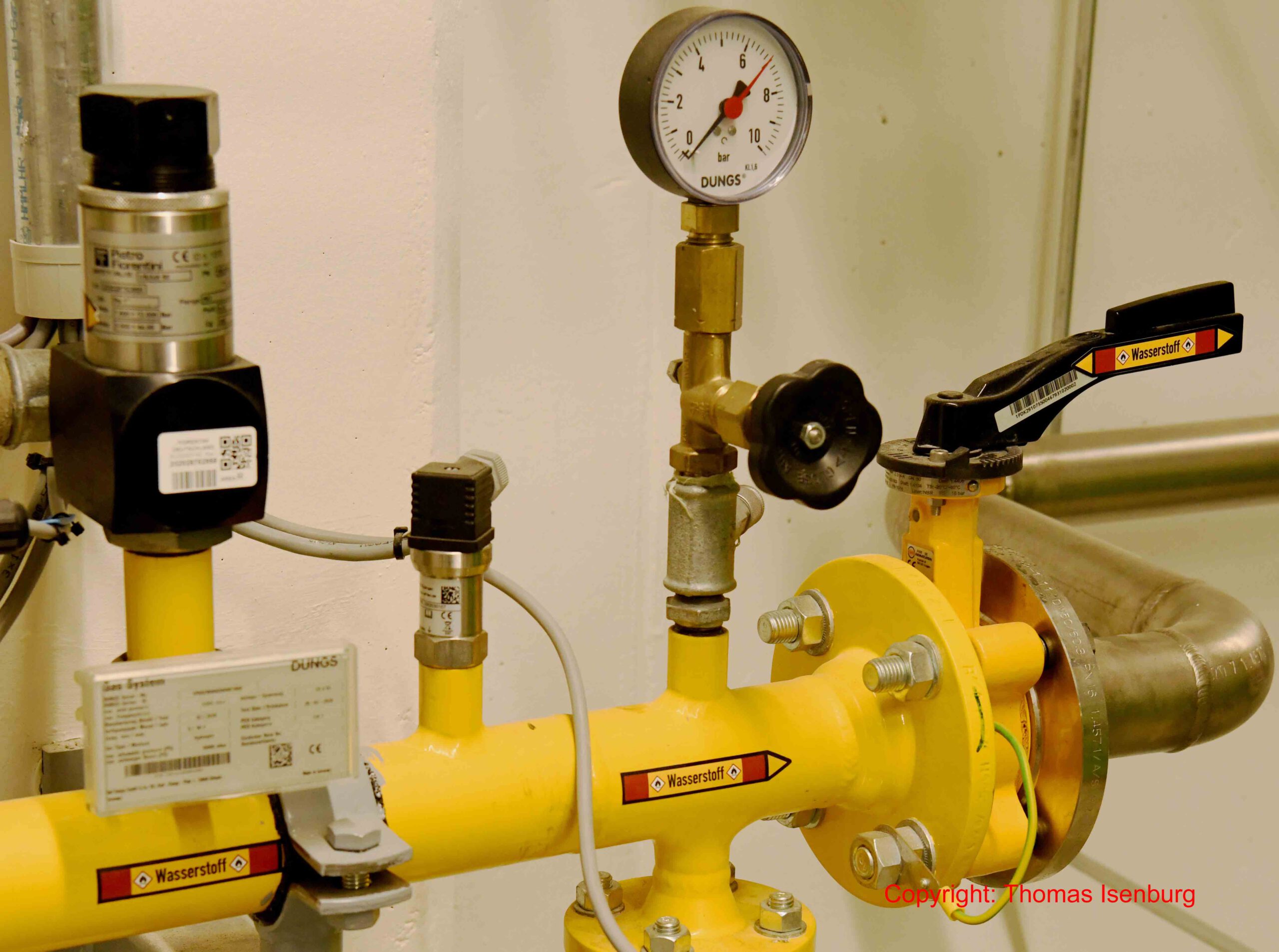 Herne in Germany, green hydrogen has been coming to the fore for about 2 years now as a source of hope for the decarbonisation of industrialised nations as they seek to meet their ambitious carbon reduction targets.

Without the import of green hydrogen, neither Germany nor Europe can achieve their climate goals. That is why the Federal Republic has published its national hydrogen strategy. The federal government wants to spend a total of 9 billion euros on this. By 2030, 5 gigawatts (GW) of electrolysis capacities are to be installed in Germany, with a further 5 GW to be added by 2035. With the 10 GW thus available, green hydrogen is to be produced from renewable electricity.  The EU is pursuing similar goals with its Green Deal. This envisages reducing the net emissions of greenhouse gases in the European Union to zero by 2050 and thus becoming the first continent to become climate neutral.

Green hydrogen can also be used in other areas of industry, for example as a basic material for ammonia production, a basic chemical for fertilisers. It can also replace the role of coal coke in steel production, a major global emitter of carbon dioxide, and thus effectively contribute to decarbonisation.

There is no question that hydrogen has been identified as a multi-talent of the energy transition. In the current debate, it has the role of the `gamechanger’.

However, there is not enough renewable electricity in Europe to produce enough hydrogen. Especially in northern latitudes, the sun’s radiation density is not high enough to produce enough green hydrogen for demand from the radiation source via efficient electrolysis. There are enough areas available, but these are overlaid by conflicts of use and interest. With the drop in prices for the production of renewable electricity, land for the installation of suitable plant technology can increasingly become a limiting factor.

Possible hydrogen sources can be found in countries with abundant sources of renewable energy. The necessary voyage of discovery for renewable hydrogen sources leads to the countries Australia, Chile, the United Arab Emirates, Oman and Saudi Arabia. More and more, Africa is also coming into focus when it comes to hydrogen supplies to Europe. The climatic conditions are excellent and constant compared to the rest of the world. Wind speeds of 8 – 10m/s, which are well suited for wind turbines, are also not uncommon in many places. Many economies, such as those in West Africa, are growing at rates between 6 and 8 percent. However, about 700,000 of the approximately 1.3 billion people there have no access to electricity. There is therefore a dilemma in this issue! Allowing hydrogen tankers to sail to Europe while other people in the region of origin have no access to electricity is reminiscent of neo-colonialist structures. Leaving the excellent sources for decarbonisation through green hydrogen unused in the face of extreme weather events caused by climate change is also not an alternative.

Initial considerations lead to a differentiated picture. In the north and south of the continent, the location factors for the production of green hydrogen are more favourable than in the regions in between, due to the infrastructure already in place for the expansion of renewable energies. West Africa also hopes to be able to use the opportunity of the hydrogen boom for its development. Studies are still being conducted to examine the potential and feasibility. So far, Morocco and South Africa are considered the most promising candidates for hydrogen supplies from Africa to Europe.

Both countries have a suitable infrastructure and the technical expertise in their own countries to be able to sell green hydrogen or products produced from it on the world market.

It is the large management consultancies such as McKinsey and Roland Berger that are tackling the issue with organisations such as the Desertec Industrial Initiative (Dii), which is known from the Desertec project. They expect competitive prices for green hydrogen around the year 2030. The German government is very interested in hydrogen projects in Africa to cover the looming energy gaps. In addition, export-oriented Germany wants to become number 1 in hydrogen production.

For this reason, the Federal Government is developing a potential atlas on the topic of green hydrogen, which aims to initiate cooperation with African countries. Federal Research Minister Anja Karliczek presented this atlas together with the Innovation Officer “Green Hydrogen” Dr. Stefan Kaufmann in June this year. The atlas analyses potentials for the production and export of green hydrogen in western and southern Africa. The result was presented to the media: West Africa has a production potential of up to 165,000 treawatt hours of green hydrogen per year. This is about 1500 times the hydrogen demand assumed for 2030 in the National Hydrogen Strategy. It could cover Germany’s electricity needs 300 times over.

The Federal Research Minister positions herself as a “powerhouse” for green hydrogen in Africa: “We don’t want to import energy from there until the local market is covered.”

The German government is supported by the Africa Association of German Business. This organisation has been looking after African-German business relations for 80 years. Chairman Professor Stefan Liebig says on the subject of green hydrogen: “This is the next big thing in German-African business relations.” Dialogues between German and African leaders should get underway. The investment needed for this green transition is huge. An online dialogue event was sponsored by the leading South African chemical company Sasol and the Konrad Adenauer Foundation. Liebig already sees a new group of energy suppliers coming, paid not with petrodollars but with hydrodollars. Opec should then be called Greenpec. This process is still in search of a clear strategy for the African countries. What is needed are informative pilot projects.

One country with concrete ideas is Morocco. It is considered a model country when it comes to the development of renewable energies. The most northwestern country in Africa has no fossil resources and has been trying to break its dependence on fossil raw material imports for about 15 years by building up renewable energy capacities. This is not an easy task, as the country’s population and energy demand, as well as its carbon dioxide emissions, have grown. To transport energy to Europe, there is a gas pipeline that could transport a certain amount of hydrogen.  This makes it easy to deliver to the immediate vicinity of the EU’s external border. The EU wants to invest heavily in its gas network.

From green hydrogen, Morocco can produce ammonia for the production of nitrogen fertiliser, because ammonia consists of nitrogen, which can be extracted from the air, and hydrogen. So far, 2 million tonnes of ammonia are imported. To produce the necessary hydrogen, a capacity of about 6 GW of renewable energy would have to be installed. This is in the order of magnitude of the capacities installed in renewable power plants. It could therefore still be a long way to go before hydrogen can be exported to Europe.

Another promising candidate for green hydrogen supply in North Africa is Egypt. The country is similarly situated to Morocco in terms of its position to Europe, and the government is soliciting green hydrogen investments so that it can close Europe’s energy gap. However, it also has large natural gas reserves and wants to convert them into hydrogen as a short-term solution. The country has an area of 7650 km2, which is about 90 by 90 kilometres, with a potential capacity of 90 GW for the installation of solar and wind power plants. The country on the Nile has already proven many times, as with the construction of the Aswan Dam, that it is capable of pioneering achievements in energy technology.

The prognosis is also favourable for West Africa, which has been in a stable phase of economic growth since 2010. This region can use future-oriented technologies and become a source of green hydrogen. Namibia also wants to become a source of hydrogen.

Jens Hauser, expert of the Chamber of Commerce and Industry in South Africa for renewable energies and green hydrogen in Cape Town, says that renewable energies are already expanding strongly in South Africa as well. With the existing developed industrial infrastructure, the production of green hydrogen is possible. South Africa has a lot of experience with coal liquefaction from its isolation in the Appart era. Therefore, the know-how and production capacity to produce green aviation fuel is rapidly available in the country at the Cape. Sasol has already installed a pilot plant. This is already competitive today, according to Hauser, depending on the airlines’ requirements. Here, South Africa has a unique selling point alongside China. For synthetic fuels based on green hydrogen, the existing transport infrastructure could then be used. In the case of green hydrogen, this would require considerable investment.

Paul van Son, President of Dii, has helped to implement the Desertec vision over the last 10 years. The experienced energy manager demands first of all that local markets for emission-free energy must be affordable. They supply the people locally. He sees exceptions to this initially in Saudi Arabia, where a quasi “emission-free island” is being created under the name NEOM, which could export green hydrogen or derived products sustainably.

All in all, the project seems very ambitious and reminiscent of the early considerations on Desertec. There is no question that hydrogen can solve the long-discussed storage problems of renewable energies and become a game changer in the global energy transition.  The investment requirements are astronomical.