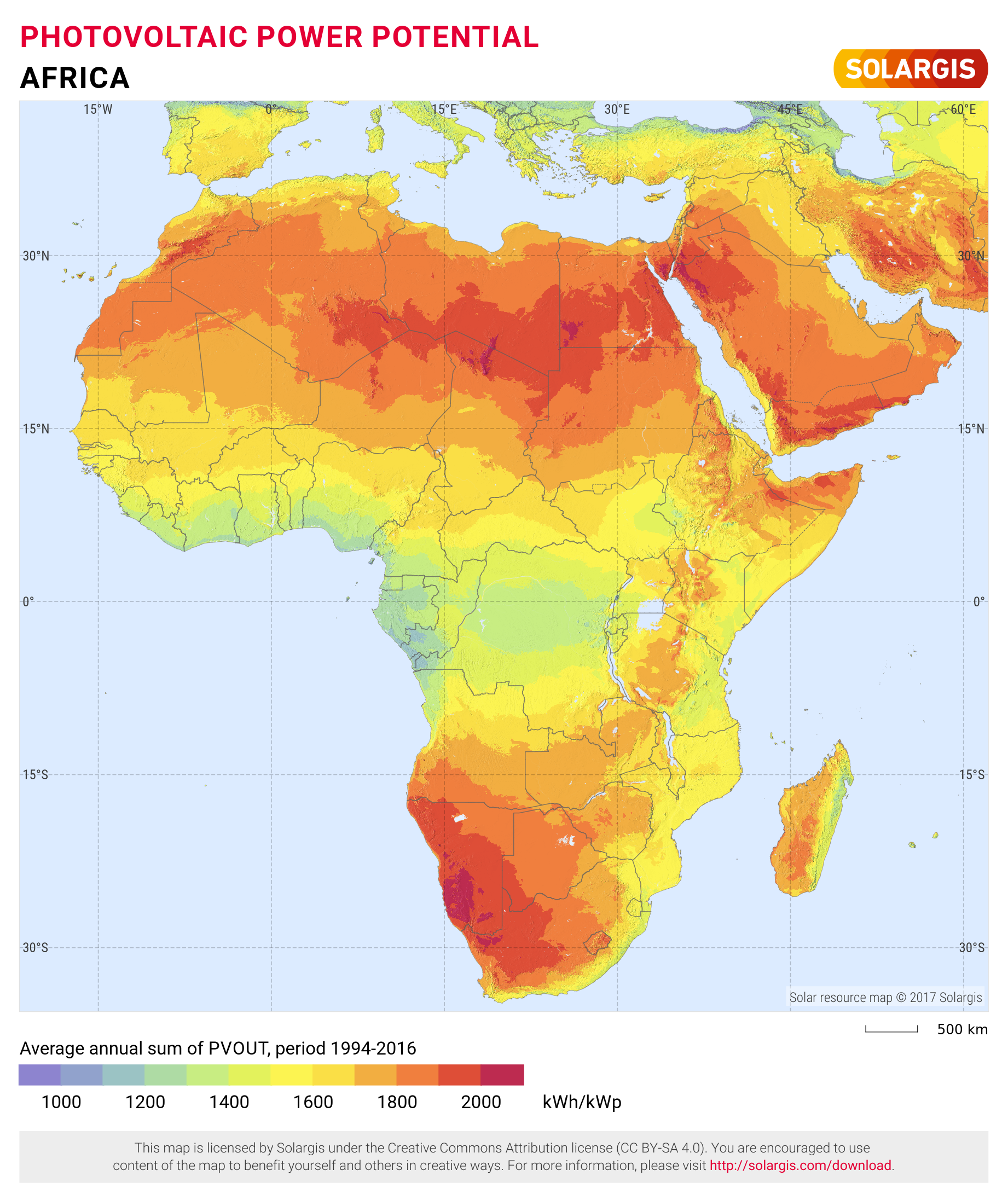 The complexity of the technical framework

Africa’s population and cities are growing rapidly as the younger generations flock to urban life. New industries, the need for air conditioning and transportation, as well as consumer behavior changes, are producing an ever greater appetite for energy. According to studies such as the Energy Outlook for Africa by the International Energy Agency (IEA) in Paris, energy needs on the southern continent will grow twice as fast as that of the rest of the world.

How Africa meets the energy needs of its rapidly growing urban population is crucial for this part of the world and the global economic energy future. The initial situation is contradictory. Africa has the richest solar resources on the planet, but accounts for only less than one percent of the installed photovoltaic capacities. With the right measures, solar energy could become the continent’s top energy source.

So far, hydropower has been the dominant energy source in sub-Saharan Africa. It is considered to be robust technology that can supply electrical power during the long lifespan of its parts. Importantly, weather has little impact on the transfer of the electricity—this is not always the case with other renewable sources. The environmental impact on energy technology is especially apparent for the large dam projects. By 2040, the experts forecast that photovoltaic and gas-fired power plants will rival hydropower’s dominant position in the energy industry. This growth will be accompanied by a significant increase in energy production and electricity.

There are two tried and tested technical methods available to exploit solar potential. In addition to the photovoltaic technology used in our latitudes, large thermal CSP (Concentrated Solar Power) power plants are occasionally used. They bundle the sun’s rays of light through mirrors either onto a receiver on the top of a tower or at the focal point of a parabolic trough. The energy of the light rays from our sun is converted into thermal energy in these power plants and then with the help of turbines into electrical energy.

The advantage: by storing the energy in the form of heat, electricity can also be produced in the evening and night when the sun is not shining. The disadvantage: the electricity from these systems is significantly more expensive than that from photovoltaic systems. Such systems have already been implemented and tested in Morocco, Egypt, and South Africa. Because of their ability to store energy, CSP power plants can be a valuable addition to the renewable energy mix.

The complex topic of solar energy has some illuminating examples from sub-Saharan Africa. Due to the Desertec discussion, solar energy in Northern Africa in particular has been intensively examined in the media.

Ethiopia’s economic growth sits at the 90th percentile worldwide. Despite this, around 30 percent of the 100 million people live below the poverty line because they do not have access to energy services. So far, the most important primary energy source is biomass for heating with a share of 92.4 percent, followed by oil for transport with a share of 5.7 percent, and hydropower with a share of 1.6 percent. About 96 of the 9,000 gigawatt hours a year are produced by hydropower plants; the rest are almost exclusively generated by wind turbines. There is no question that electricity generation capacities have to be increased considerably in rural areas so that people’s quality of life improves there as well.

So far, photovoltaic systems have only been used in smaller projects such as PV-based teaching radios and vaccination refrigerators in remote rural areas. Access to modern energy services is still not particularly widespread there – despite being in an area with a very high potential for solar energy. The Ethiopians with their Prime Minister Abiy Ahmed, who has just been awarded the Nobel Peace Prize, have a considerable interest in solar energy. The first moves in this direction have only occurred in the recent past. In the meantime, a PPP law has been created to provide a state-wide framework. In the recent past, contracts were signed for two 125 MW photovoltaic projects and the contracts were awarded to the Saudi project developer ACWA Power. ACWA Power is successful in North Africa and runs numerous solar and wind power projects there. The electricity is expected to be produced in Ethiopia at a price of 2.526 USD / kWh. This is more expensive than the record value in the United Arab Emirates of 1.7 USD  / kWh.

Ethiopia has high hopes for off-grid solutions for bringing electricity to rural areas. They intended to supply 5.7 million households with off-grid electricity, primarily via solar photovoltaic technology. A central PV unit with a battery can supply an entire village with a mini power grid, completely revitalizing the infrastructure. In recent years, more and more solar PV wholesalers and retailers have come onto the market. With people’s needs, awareness of the possibilities of solar PV products is also increasing. A single solar panel already occasionally provides some electricity in a single hut. Competition in the East African country is characterized by price, not quality. There is only a small proportion of high quality products. Cheap Chinese models are replacing others at the expense of quality. There is also a lack of money to bring qualified products to the market.

The situation in Kenya is similar, yet less robust. Economic growth here is only between 5 and 6 percent. The natural conditions for using solar energy are almost as favorable in Kenya as in Ethiopia. High radiation values ​​of around 6 kWh per square meter per day can be achieved on 106,000 square kilometers in the country. An output of 500 MW should therefore be installed by 2022. Here too, off-grid diesel systems are to be replaced by PV systems where possible.

A special project is associated with the name Kaysalt, the largest salt producer in East Africa. Seven hundred permanent helpers and another 2,000 seasonal workers work there. The market leader for the vital salt relies on environmentally friendly business models. On the shores of the Indian Ocean there are dozens of kilometers of salt pans in which salt is extracted from sea water by evaporation. After finishing and packaging, Kaysalt delivers the table salt to all of East Africa. A Kenyan company, Harmonic System, has been operating a PV system with a capacity of just under one MW since 2016 to produce electricity. The project was driven by the German SMA Sunbelt, which also provided funding. With the power plant, Kaysalt now covers around a quarter of the electricity requirement, thereby reducing electricity procurement costs by around 25 percent. This saves 24,000 liters of imported diesel.

South Africa’s energy supply is certainly one of the more difficult energy issues on the African continent. South Africa is one of the places with the best access to electricity on the continent, but the entire country laments over frequent blackouts. These blackouts have economic ramifications of their own. Mines cannot continue to work. Supermarkets have to spend 1,000 Euros per month on diesel. Hairdressers and cafes send employees and disgruntled customers home.

One cause of the constant blackouts is the mismanagement of the state energy provider Eskom. Corruption has been rampant, particularly under the Zuma government. There are no experts in key leadership or management positions. So far, the Ramaphosa II government, which began with a wave of hope, still lacks any resounding success. Frequent blackouts are still a normal part of the life of South Africans. Each day that there is a power outage, it costs the emerging country the equivalent of more than 300 million Euros.

The targets for renewable energies are very ambitious. In the field of solar energy, 5.7 gigawatts are aimed be added to the 1.7 GW already installed by 2030. In addition to electricity from a nuclear power plant, the country’s electricity supply depends heavily on the coal available in South Africa. To save carbon dioxide emissions, the Rainbow Nation introduced a CO2 tax in the middle of last year. The goal is to reduce greenhouse gas emissions overall. That is why CO2 emissions are taxed at the equivalent of 120 Euros per ton of carbon dioxide. This should stimulate investments in renewable energies.

The solar radiation findings indicate excellent conditions for further development. With up to 2,200 kilowatt hours per square meter, these conditions are similar to those in the Sahara and Australia. So far, a considerable number of solar power plants have been constructed in both photovoltaic and CSP power plant forms. However, the market is still at the starting block and numerous difficulties have to be overcome before it can finally be winning any race.

It is probably one of the central global energy concerns—whether and how electricity can be reliably sourced and distributed on the African continent. Here, solar energy has considerable potential. However, implementation is still in its infancy.

One issue is the lack of profitable and extensive business models. Hurdles may also be the lack of appropriate legal framework, difficult financing options, or widespread corruption. With energy needs increasing, it’s a race against time for Africans to substantially improve the energy infrastructure and take hold of solar power opportunities for the people of the continent.