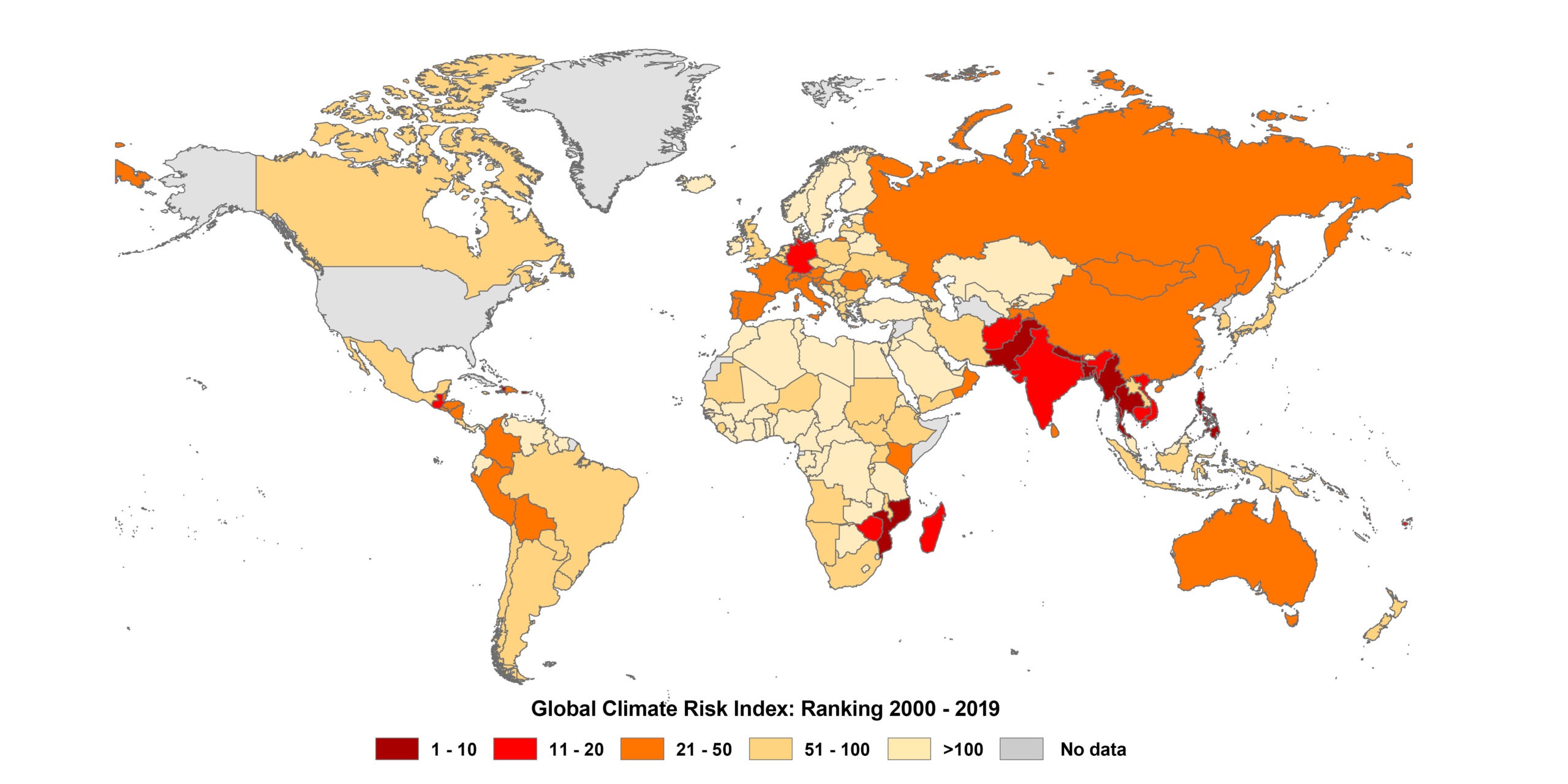 The Index shows that once again people in developing countries were particularly affected by the consequences of extreme weather events, in particular severe cyclones and subsequent flooding and landslides in 2019. Mozambique and Zimbabwe top the negative ranking for 2019, hit hard by Cyclone Idai, the most devastating cyclone ever observed in the western Indian Ocean to date. Mozambique, Zimbabwe and Malawi (ranked 5th in the 2019 index) suffered a total of more than 1100 deaths and recorded total losses of more than US$7 billion (in purchasing power parity terms). Last weekend, the region was again hit hard by a powerful cyclone. Nearly 480,000 people worldwide have died in over 11,000 extreme weather events since 2000. Nearly 480,000 people worldwide have died in more than 11,000 extreme weather events between 2000 and 2019. Property losses totalled US$2.56 trillion (in purchasing power parity terms) during this period, up again from the previous Long-Term Index (see note at end).  Severe storms and their direct consequences such as flooding and landslides were the most destructive weather extremes in 2019, with tropical cyclones affecting six of the ten most affected countries in 2019. This development is in line with the state of climate science, which expects an even greater increase in severe cyclones if the Earth continues to heat up.

In January, Mozambique was hit by another terrible event. After two years, another cyclone. “The images are fatally reminiscent of the destruction caused by cyclone “Idai” in Mozambique almost two years ago,” says Jutta Herzenstiel, the responsible officer at the disaster relief organisation of the German Caritas Association. “Now the storm has again devastated large parts of Mozambique, leaving thousands homeless, destroying crops and once again submerging the city of Beira.” For the people, this is a bitter setback: “Many have not yet recovered from “Idai”,” says the speaker, who has been instrumental in the reconstruction in Mozambique for Caritas international.

Around 7,500 houses have been rendered uninhabitable by the storm, some 55,000 hectares of farmland and pastures have been flooded by the heavy rains that have been going on for weeks, causing dams to break. “Overall, Mozambique seemed better prepared this time,” says Jutta Herzenstiel. Evacuations and precautions saved lives. Officially, nine people were reported dead. The Chimoio district reported only minor damage. “The new houses built there by Caritas international have withstood the storm,” explains the speaker.

According to a study by the World Bank, climate change could threaten an additional 100 million people worldwide with extreme poverty by 2030. Climate change jeopardises development successes that have already been achieved as well as those that will be achieved in the future. Conversely, determined climate protection holds considerable potential for economic and social development, innovation and sustainable jobs.

To the Climate Risk Index:

Germanwatch has been compiling the Global Climate Risk Index annually since 2006 on the basis of the NatCatSERVICE database of the reinsurer Munich Re and socio-economic data of the International Monetary Fund (IMF). The index looks at the death toll and property damage caused by extreme weather (in purchasing power parities to enable comparability) – both the absolute figures and in relation to the number of inhabitants or gross domestic product. Although the evaluations of the increasing damage and fatalities do not allow a simple statement on what proportion of this can be attributed to climate change, a picture of how affected the states are can be drawn.

This article is based on press releases from the German Federal Ministry for Economic Cooperation and Development (BMZ), germanwatch and Caritas (“Caritas International”).

The silent suffering of Madagascar