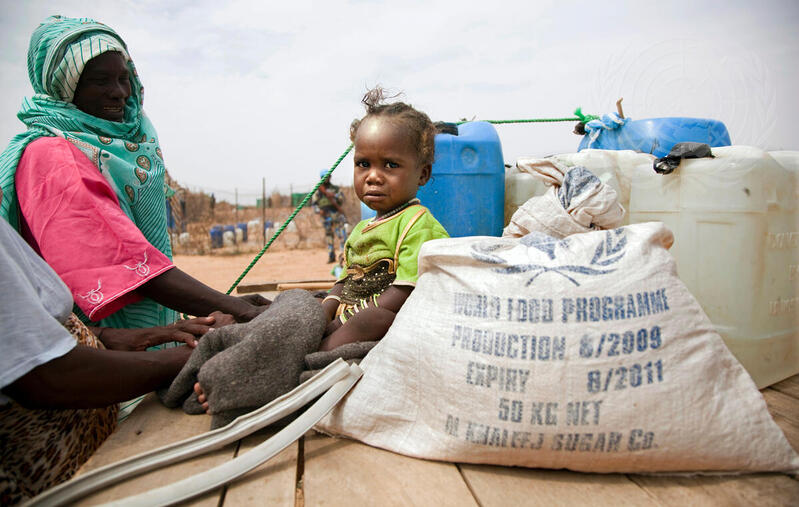 Displaced Sudanese sit with rations provided by the UN World Food Programme (WFP) at a camp in Shangil Tobaya, North Darfur. The camp was populated a year and a half ago by the Zagawa people who fled fighting in their native South Darfur.

Herne, Germany: It will be difficult to feed the world. Not only are we getting more and more people, but now a massive war is destroying the fight against hunger. Ukraine and Russia are among the world’s biggest grain exporters. This is particularly evident in the case of wheat, the bread grain. In the ranking, Russia is the world’s largest and Ukraine the fifth largest wheat exporter. Now, wheat exports across the Black Sea are not possible because of the war. A longer-term shortfall could lead to massive problems, especially for poorer countries in Africa. Before the war, 45 African countries imported grain, mostly from Ukraine and Russia. Important importers are Tunisia and Egypt. With 100 million people, the country on the Nile is the most populous in the Arab world. Grain production on the world market can be increased in the short term if the land earmarked for biofuels is converted for the cultivation of bread grain. However, Ukraine cannot be replaced as a supplier in the long term. Its failure worsens Africa’s supply and pushes up prices. Is a humanitarian catastrophe looming?

Journalism from Africa for Africa. A story of Chang’ombe village community by Adrian Mapunda from Tanzania

The Heavenly Garden within the Unforgettable Tanzania