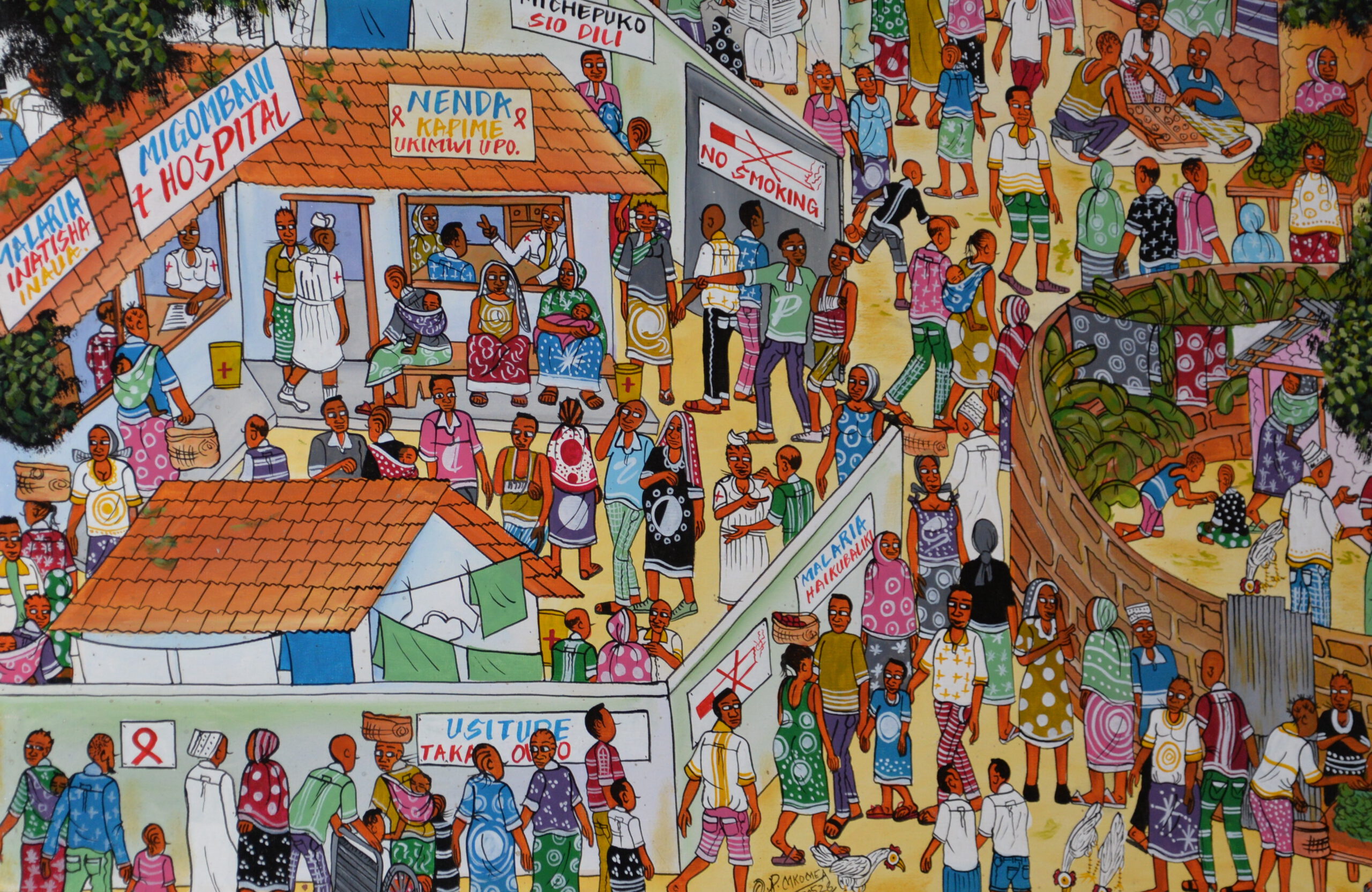 Tanzania is Scince 1961 an independent country - unknown artist from Africa

The United Republic of Tanzania came into being after the unification of two countries i.e. Tanganyika and Zanzibar on April 26th, 1964. Tanzania like many other African countries also had a share of being under colonial masters for many decades.

It began with Greeks, Persians and other Asians who came to the East African Coastline by Monsoon winds and ended up there trading with the local inhabitants. Later on, there came the Omani Arabs who besides being traders, their Sultan in Oman established his rule in Zanzibar and the aforementioned coastline.

The Portuguese also were not left behind, as through their explorers, they also established themselves on the Eastern Coastline towns such as Mombasa in Kenya, Sofala in Mozambique and Kilwa Kisiwani in Tanganyika.

Then came the Germans through their famous explorer Carl Peters who led to the colonization of Tanganyika, Rwanda and Urundi. This German Colony came to be known as German East Africa (Deutsche Oastafrica) which reigned until 1916 when World War One (WWI) started.

After WWI the Germans were defeated by the allied forces therefore, Tanganyika was placed under the mandate of Britain by the League of Nations as Tanganyika territory. The British ruled Tanganyika until her independence on 09th of December 1961.

Meanwhile Zanzibar was under the of Sultanate of Oman until the uprising that led to the Zanzibar’s people’s revolution on 12th January 1964. Later after the Union between Tanganyika and Zanzibar took place in April within the same year, the late Mwalimu Julius Kambarage Nyerere became the First President of the United Republic of Tanzania while the then President of Zanzibar, Shaikh Abed Amani Karume became the Vice President of the United Republic of Tanzania.

Fifty-nine years after the independence, if one moves around in different parts of Tanzania, will find nostalgia, many traces left behind by colonialists. These traces range from old colonial administrative buildings, slave market buildings, railways, roads, schools, hospitals, churches, mosques, cloves farms, sisal and coffee plantations to mention a few.

In short there are so many traces left behind the colonialists. As far as large-scale farming is concerned, for instance in Zanzibar, it is during the time of Arabs and Portuguese colonialism that spices farming including cloves were introduced. While in mainland Tanzania Sisal was introduced in 1892 by Germans. Coffee plantations on the slopes of Mt. Kilimanjaro were also introduced during the German reign, then the country started experiencing economic and agricultural development.

Because of this, need arose to transport goods as well as farm produce to and fro. Therefore, it led to the idea of construction of a Central Railway Line by the Germans in 1896, from the Capital Dar es Salaam to the hinterlands i.e. shores of Lake Tanganyika in Kigoma Region.

Groundnuts cultivation was later introduced in the country by British. In 1928, the then British Governor of Tanganyika Territory Sir Donald Cameron constructed a railway line from Tabora to Mwanza. These railway lines are evidenced to date and still in good conditions.

As far as transportation is concerned, there are still many roads that can be traced back to the time of colonialism. Within Tanzania’s greatest Lakes of Tanganyika and Victoria, two ships i.e. M.V Liemba and M.V. Victoria were installed respectively and are still operative.

The most important colonial trace left behind by colonialists, and a massive one is Religion. This marked changes in lifestyles as well as additions to appearances of towns as religious buildings came into existence.

During the Arabs times, Islam was introduced within the Coastal towns including Zanzibar. Also, a good number of local inhabitants residing along the slave trade routes in the hinterland were converted to Islam. These Arabs built many mosques as houses of prayers for their followers leaving traces in towns such as Zanzibar, Kilwa Kisiwani (Lindi), Tanga and Dar es Salaam just to mention a few. Christianity was also brought as Germans introduced Lutheranism and British Anglicanism during their reigns.

As far as education is concerned, the Germans introduced schools that helped training the locals who could help them in administration. The German word ‘Schule’ is now the Official word for School in Tanzania however pronounced as ‘Shule’ in Kiswahili.

The British as well built a lot of schools, but the aim was to prepare the locals to be able to administer themselves after the attainment of independence. Tabora School is a living example that nurtured most children of local chiefs who were trained to become future leaders including the First President of Tanganyika Mwalimu Julius Kambarage Nyerere and other post-independence leaders.

The other significant traces of colonialism in the country are the old buildings of historical and architectural significance. Zanzibar Island has buildings with Portuguese, Germans, British and Arabic architectural fusions in the Stone Town with ‘Beit al Ajaib’ meaning House of wonders being the prominent feature.

In addition, Old Slave Market buildings where slaves were being sold or auctioned are also found in Zanzibar and within Bagamoyo town, a small old town situated few miles from Dar es Salaam City.

Part of life or lifestyles lived by human beings are bonded to the history once created. Evolutions and civilizations are hooked or can also be defined from the historical moments that were once experienced. Infrastructure, buildings to mention a few and other monuments in the country are of historical, economical, architectural, cultural and aesthetical significances. Therefore, it should be obligatory to carry on conservations processes including establishment of laws to protect these historical pearls.

A European view from Belgium: