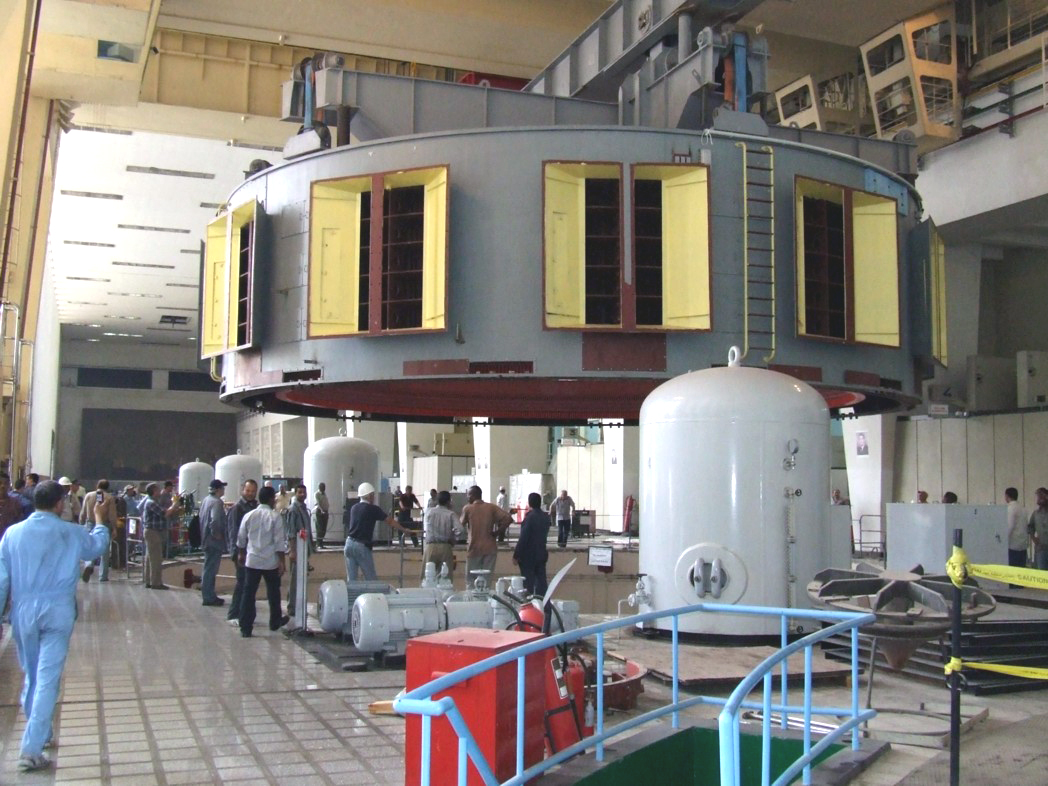 There is energy poverty in sub-Saharan Africa. Many people there have no access to electricity, which can greatly hinder economic development. Available statistics suggest there are over 600 million people without consistent electricity access–that’s over 60 percent of the population. The exceptions are South Africa and the North African countries, which have electrification rates well over 50 percent.

Conventional biomass, especially for cooking, is currently the most used energy source in Sub-Saharan Africa. In addition to wind and sun, hydropower in particular seems to be a more attractive energy source for the continent. Between 10 and 15 GW of hydropower is planned to be made available in the next few years. Overall, experts estimate the potential of hydropower to be around 1750 GW.

In Africa, hydropower has its advantages: it is emission-free, the technology is already developed and mature, and its systems are extremely efficient. One of the biggest advantages of hydropower over other alternative energy sources is that the power generated fluctuates considerably less and can also be largely planned.

Energy can be accessed when it is needed using storage power plants – a huge advantage over other renewable energy sources such as wind and sun. In addition, there are numerous side benefits such as irrigation, drinking water supply, contributions to flood protection and navigability of rivers, according to Markus Berger, spokesman for the Federal Ministry for Economic Cooperation (BMZ).

But there are also some disadvantages, especially because numerous hydropower plants are ecologically controversial. They can affect the fauna and flora in the area and force people to relocate. The BMZ therefore rarely sponsors large dam projects. And if they do, they must meet the recommendations of the World Commission on Dams (WCD). This includes extensive tests to determine the environmental impact of a building as well as research to determine social consequences for the area, explained the BMZ press spokesman on the role of hydropower plants in Africa.

Hydropower plays a special role in the energy mix of East Africa. In a comparison across Africa, East Africa has emerged as an economically dynamic region in recent years. With the relatively good economic growth, a certain level of prosperity has developed in this region for larger sections of the population.

The countries of Kenya, Ethiopia, Rwanda and Angola rely on hydropower. The electrification rates differ depending on economic and political developments.

The Kenyans are proud of their commitment and have raised the issue of green energy by including illustrations of solar systems, wind turbines and a geothermal power plant on their 50-dollar banknote.

The situation in Rwanda is different. The electrification rate is much lower. Only about 35 percent of the population is connected to the power grid. The 10 percent hurdle was only exceeded in 2010. This slower development can certainly be connected to conflicts between the Hutu majority and the generally wealthier Tutsi, which date back to colonial times. The clashes culminated in a horrific genocide in 1994 with over 1 million people killed within a three month timespan. Fortunately, the current development seems to be positive and peaceful.

In Rwanda, hydropower accounts for 42 percent of the energy industry.

Ethiopia occupies a special position on the African continent. It is considered one of the oldest countries in the world and has had comparably less outside force, violence, and influence with the still devastating exception of the  Italian occupation during the Second World War resulting in  significant human rights violations. As a multi-ethnic state, Ethiopia is rich in ethnic groups and languages, which can also be a powder keg for the country’s internal tensions, which still exist.

According to the World Bank, electrification is at 57 percent–similar to that in Kenya. Hydropower has a share of around 90 percent. The Grand Renaissance Dam is a special prestige project. The gigantic project is already very far advanced and is associated with the accumulation of the Blue Nile, which has caused concern in Egypt, as the North African country has been attached to this lifeline for millennia.

Negotiations have been going around in circles for years, but now time for negotiations is running out: the mammoth structure started in 2011 is now in the first filling phase, in which the water retained by the dam will be missing in the lower reaches of the river. The most sensitive point? Egypt covers all of its water needs from the Nile.

The climate in Uganda is similar to that in Kenya. The country is as big as the Federal Republic. History is not without problems in this country either. In 1971, dictator Idi Amin came to power in a military coup with devastating consequences for the population.

Here too, however, development is now positive. The most recent statistics for 2017 show the country’s electrification rate is around 23 percent. With an electricity consumption of 74 kWh per capita, the country ranks 198th out of 213 countries.

The main energy source for the supply of electricity is hydropower. The two hydropower plants Kira and Nalubaale together have an output of 380 MW. The Karuma hydropower plant is a large-scale project that was originally scheduled to end in December 2018 and, with a further 600 MW, will increase the country’s electricity generation capacity by approximately one and a half times.

The Isimba hydropower plant with another 183 MW is under construction. There are also smaller projects that will lead to a surplus of electricity if electrification does not proceed quickly enough.

Peter Magauer, Managing Director of Andritz Hydro GmbH, is one of those who is familiar with Africa’s hydropower business. In the recent past, Andritz has developed business activities in several countries such as Angola and Congo.

A large hydropower project in Angola is the Lauca hydropower plant. Construction started in 2012 and went online in June 2017.  Magauer reports, “We delivered turbines, generators, transformers and auxiliary systems and were subcontractors to the construction company.“ In these projects, the environmental and social considerations  play a big role. International organizations such as the financing banks look very closely at this, says the managing director.

Financing in particular is often difficult. Large projects are often started without total funding. Before funding is complete, building begins and the first operational machines are set in motion to produce electricity. With the proceeds from the sale of electricity, the project can be completed, even if it is delayed. That is how the hydropower expert from Andritz describes the complex processes. Magauer: “Overall, financing is difficult due to the long periods of planning and construction and also due to the lack of political stability in many African countries.”

Sometimes there are unexpected developments within an already complex process. In the above-mentioned Grand Renaissance project in Ethiopia, the prevailing opinion was that the project was unrealistic. “Ethiopia still completed the project but was forced to move forward entirely from its own resources because the banks had withdrawn. In part, they had issued bonds. It is difficult to manage such a large project, but in the long term large hydropower plants are a very inexpensive and domestic energy source.“

For larger projects like Inga (DR Congo) or Laúca (Angola), Magauer explains that they always have some of their own experts on site. Magauer: “The situation for the large-scale project in Angola was somewhat easier because we didn’t have to do the overall assembly. Given this, it is possible, but can also be a different kind of challenge that we, the western machine supplier, set up the entire construction site infrastructure and provide the entire staff with several hundred people. Here Andritz had about 30-40 expert people on site. The entire infrastructure was provided by a construction company. This was a closed area, in which the infrastructure provided for a restaurant, sports facilities, and accommodation.“

The project was a huge step for Angola. Magauer says, “Between 6-7 million people live in the Luanda area. Before the apartment blocks, mainly diesel generators were operated and there were regular large-scale power cuts. In the meantime, the electricity supply to the Angolan capital is secure thanks to the hydropower plants, which largely run on machines from Germany.”

The managing director of Andritz Hydro summarizes: “Hydropower is a suitable form of energy because it is cheap in terms of resource consumption over the life cycle. I think that wind and sun are very suitable and justified because of the energy sources in Africa. But hydropower will be needed to keep the grid stable because it is always available. In the future, a third of the additional energy that would be provided could be based on hydropower, especially in Africa.”

Magauer finds it difficult to actualize some large dam projects because they are often very controversial and the Western partners struggle to take seriously accompanying measures necessary in the project country that they believe are unimportant or superfluous.

That is why the Federal Development Aid Ministry takes care of energy projects such as the construction of small hydropower plants. For this purpose, KfW Entwicklungsbank founded a project development and financing company on behalf of the BMZ: the respons Ability Renewable Energy Holding (rAREH). It is a private-public company that co-develops, co-finances, and operates small and medium-sized energy plants in sub-Saharan countries. The private partner in this holding company is the Swiss wealth management company respons Ability.

Since mid-2014, rAREH has been supporting the construction of Rwanda’s Rwaza small hydropower plant as an investor, together with the Danish investor Frontier Energy. The local developer DC Hydropower is responsible for the implementation of the project and is supported by the American Power Africa Initiative.

The population benefits from hydropower plants. The quality of life and the economic opportunities of the population improve through the emission-free and weather-independent generated electricity as well as the possibilities for irrigation, drinking water supply and flood protection.