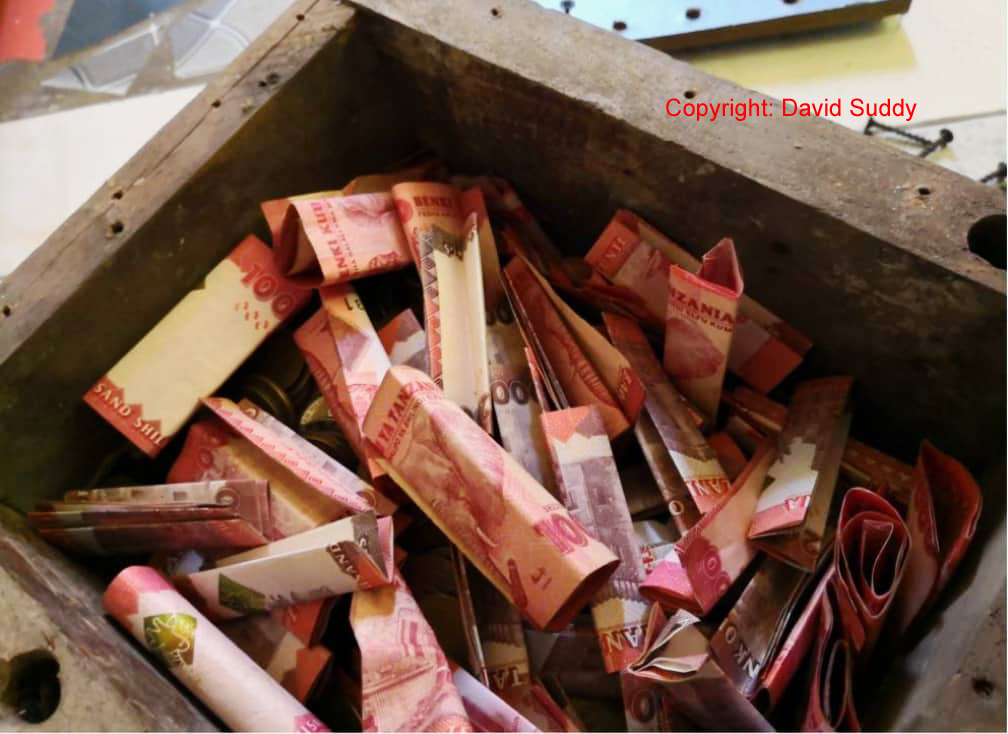 Tanzania: Kibubu is derived from swahili word Kibunda meaning the lump sum of money store for emergence and future uses.  In Tanzania is regarded as an informal way of saving money basically by the poor people since way back before the onset of colonialism. In other definition s can be elaborate d as kind of financial services for the poor that help the poor turn savings into lump sums. This is kind of traditional way of saving and it’s still used up to date by the lower income households since they cannot access or afford the formal saving institutions and deposits.

The economies of East Africa before the advent of Colonialism were characterized by subsistence economy, there was the petty commodity production, in some areas there was trade due to Arab Influence commonly known as the “East African Long-distance trade.”

Owing to the blooming of trade and Commerce in the Eastern part of Africa, some banking practices had begun by the mid-19th Century, and developed in the dominions of the Sultan of Zanzibar in East Africa. In Tanzania, this development began in 1840 when the Oman Arabs moved their capital from Muscat to Zanzibar and took control there. Gradually Zanzibar’s commercial prosperity grew un-waveringly, with the township becoming a central point in the region. The first bank in East Africa was established in Zanzibar known as The Credit Bank.

With the coming of colonialism in East Africa, the business of banking expanded to greater heights. Example in Tanganyika by 1905 two banks were established Deutch-Ostafrikanische bank in Dar es Salaam and, in 1911, Handlesbank fur Ostafrica in Tanga. These banka marks the era of Germany colonial rule. Thus the emerged the formal kinds of financial institutions that could make management and organization of cashflow in Tanganyika. After independence in 1960’s there established Bank of Tanzania (BOT) which undertake the management and organization of cashflow in Tanzania.

Good financial services for the poor are a matter of doing these kind of means of savings; In as many different ways as possible (saving up, saving down and saving through). Three ‘archetypal’ ways of converting savings into lump sums as proposed: Saving Up (which is self-explanatory); Saving Down (taking a loan as an advance against future capacity to save); and Saving Through (making a continuous set of deposits which are converted into a lump sum at some point in time during the flow: insurance cover does this, and it is also the basis of Rotating savings and credit associations, or ROSCAs which is regarded as merry-go-rounds or cash-rounds kind of saving. Over as many different periods (varying from very short term for quick needs, to very long term for old age or widowhood, for example) as possible In ways that are convenient, quick, appropriate, flexible and affordable.

All people, regardless of where they live, their wealth or their livelihood, can benefit from a range of financial services to enable them to manage their household finances in the most efficient way. Poor people seem to rely heavily on rules of thumb, conventional wisdoms, and habitual practices to manage their money. In the context of decision fatigue, relying on rules of thumb makes sense and can produce more discipline. These behaviors, more than deliberate, seem to be automated decision-making.

From various analysis it emerges that the low income people and very poor have extremely limited access to the formal sector institutions. This comes as no surprise, but somewhat more unexpectedly it emerged that they have only limited access to the new breed of micro-enterprise financing MFIs Banks and other financial institutions. Most low income people rely on the informal sector and other traditional ways of saving to manage their money. For instance the people of lower class  have used to keep money on wooden boxes or steel boxes (kibubu) whereby they accumulate the large sums for about a month or for the year: for a while they find money enough to encounter their basic needs. More or less everyone saves some cash at home or about their person though the poorest may experience periods when they can’t do so. Among informal group-based devices ROSCAs in Swahili dialect is known as VIKOBA (savings clubs whose members agree to make a set cash deposit at set intervals, and pass the whole of the sum collected on each occasion to one of their members in rotation) are especially popular in Tanzania since way back. The poor and not-so-poor have almost no access to moneylenders of any sort (informal or formal), a fact that contributes to the widespread popularity of the Micro Financial Institutions (IMFs), though some belong to socially-defined unorganized informal groups that lend cash to each other on a ‘reciprocal’ basis. Various conditions and phenomena can motivate the low income people to save. For instance the low income people need usefully large sums of money to deal with life cycle events such as birth, death and marriage, education and home-making, widowhood, old age and death, and the need to leave something behind for one’s heirs, and for seasonal variations in consumption; furthermore in order to cope with impersonal emergencies such as floods, cyclones, and fires, and with personal emergencies such as illness, accident, desertion and divorce, large sums of money are again required; moreover there are opportunities that require large sums of money, such as starting or running businesses, acquiring productive assets.

Technological revolution has put much emphasis for the poor to save their money enough to address their needs. Thereare also numerous formal financial systems in place through which  people manage their finances better for example Mobile money by mobile phone companies many other which provide financial saving service of Digitized Kibubu such as KIBUBU digital. These kind of Digitised Kibubu enable people to save over Millions of money rather than traditional ways of keeping coin and note which been found to have more risks such as theft fire burning, breaking and limited capacity to save; in ways that fit the more standard definition of financial intermediation.

The mobile money technology to some extent has put some challenges in saving money for instance when a person deposits a cash there is no transaction fee but during withdrawal of money the transaction fees and  deductions are high: this is like transactional robbery especially to the lower income people since further deductions are so high recently regarding the levy taxes from the government in each transaction  made by the subscribers; as the mobile networks increase further deductions to the subscribers which in turn suffocates the lower income household who used to save their money on Traditional Kibubu means without any kind of deduction.

While low income people are able to save much more than is commonly thought, the fact that they are poor means that they only have access to limited resources. It also means that there is only so much they can do to help each other out, even when they are affected by shocks at different times. Mutual support systems thus tend to benefit the better off proportionately more; poorer people are likely to have less reliable support networks and thus tend to be hit harder when problems strike.

Access to financial services that enable the poor to manage their finances without having to rely on insecure or expensive forms of saving, asset sales, and unreliable loans can enable poor people to maintain a more stable and secure flow of income, and build up assets in the future.