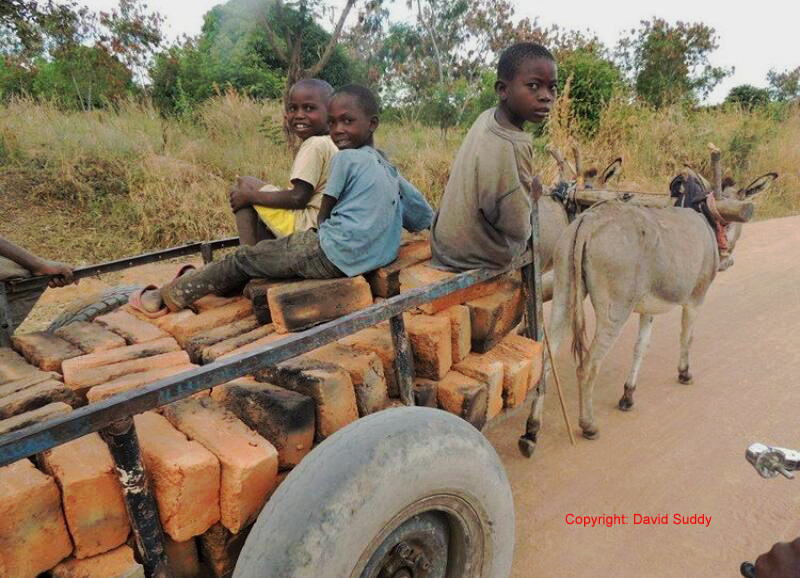 Journalism from Africa for Africa, by David Suddy

The use of donkeys as means of transport in Africa dates back to historic times. Packing is one of the most ancient forms of transport that preceded even the invention of the wheel; that it has survived to the present day emphasizes its value. Donkeys are healthy and strong animals; donkeys do not often fall sick like other animals. Donkeys are labelled as ‘Beasts of Burdens’ in many developing countries. Observations have shown that, in many peri-urban areas in Africa, draught animals can provide an important means of transporting goods and produce.

Donkeys are being used daily to transport water, wood for fuel, agricultural produce, and building materials. They are also used to carry pregnant women and the sick from hilly areas to hospitals and dispensaries and to some villages.

Donkeys are used in a variety of activities. Smallholder farmers, coping with labour shortages and loss of other livestock due to drought, use donkeys to cultivate their land. By using donkeys in agriculture and transport, farmers have increased their productive potential and expanded their marketing options. Donkeys have also provided employment for many people who hire out donkeys or use donkey carts on a commercial basis for a transport service for water and building materials like stones and bricks to remote areas.

The inherent problem is a shortage of means of transport; for example, the unavailability of pick-ups in most remote areas, a shortage of feeder roads especially in the hilly and mountainous areas, tiresome methods of carrying sick people from hilly areas, inaccessibility to main roads, impassable small uphill paths, high transport costs, and the relegation of carrying of loads to women. These are more evident to rural areas whereby many women and children are trekking long distances over the hills carrying agricultural produce while men use bicycles. Most of the women and children’s time and more than 60% of their effort are spent on transport that is consumed by the domestic needs for fuel wood and water.

A donkey as a pack animal provides a means of transporting a range of products more rapidly to markets and in greater amounts than can be done on foot, but cheaper and more easily than relying on public transport or motor vehicles. It increases the range of distances over which produce from a farm can be sold. It is a door-to-door service, so perishable products such as vegetables especially tomatoes, milk, eggs, poultry, charcoal’s  grain and animal fodder can arrive safely with less damage, stress, or effort than if they had to be transferred from one means of transport to another and back again. The overall supply of the perishable products through donkeys requires more energy, time, and effort to make profits. Nevertheless, it can be quantitatively beneficial but qualitatively costly as it is energetic where the market is not reliable.

Furthermore, donkeys are owned and used by large numbers of people engaged in small-scale agriculture, by small-scale transporters and, in some areas, by women. Women in peri-urban and rural areas have a heavy work burden. For example, some Maasai community members use donkeys for fetching water, for household shifting during migration, for carrying the sick to a hospital, for carrying sick calves, for transporting, shopping, and for pulling fencing materials.

The Maasai community donkeys have been an essential valuable animal especially to the Maasai women. The  donkeys aid in domestic and other productive activities such as transporting water, fuel wood, agricultural produce, building materials, and transporting grain to the mills and other products to the markets.

Most of the people in rural areas walk a long distance to the market, which is located three to six miles away, and spend approximately 5-8 hours traveling there and back. Transportation of agricultural produce from the fields consumes at least three hours and is carried out daily. This is especially time consuming and difficult during harvesting seasons.

The price of donkeys soared in East Africa after a Chinese company opened some slaughterhouses in Nairobi and began buying donkeys to produce donkey meat and send to the Chinese market. Nowadays, the number of donkeys has dropped in Tanzania, and it is known that donkeys in most of the places have already disappeared. In Tanzania, and other communities at Dodoma, Singida, and Shinyanga, donkeys have been sold to the Chinese as the donkey’s meat is appreciated in China. Subsequently, the number of these animals dropped dramatically; for instance, some slaughterhouses were opened in Shinyanga and Dodoma. Eventually the Tanzania government closed them due to environmental pollution and the reduction of donkeys as tools of production (popularly known as Beasts of Burden).

Locally, most of the injured donkeys (due to either overloading or other accidents) are slaughtered and the products such as meat are consumed; other parts of the donkey, like skin, is then used for making belts, bags,  beds, and other useful items.

Some donkeys that are too stubborn and are left to roam around, and even some owners surrendered them back because they could no longer manage them. These donkeys destroy the crops and in the end, they become hyena’s meals.

The sub-Saharan winds Developments in the African wind market

My way to Africa