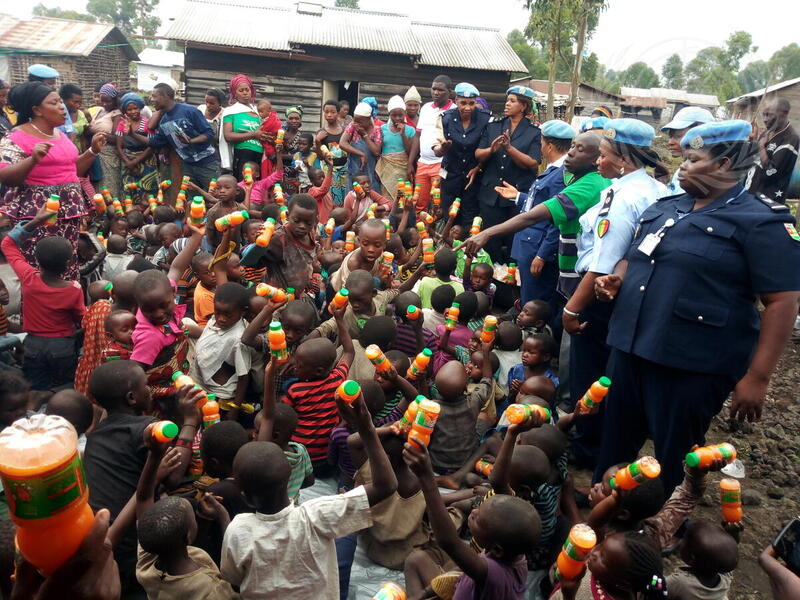 Police officers serving with the UN Police (UNPOL) for the United Nations Organization Stabilization Mission in the Democratic Republic of the Congo (MONUSCO), visit the Grace orphanage in Kibati, North Kivu Province, in the Democratic Republic of the Congo. The visit took place in conjunction with the International Day of the African Child (16 June). Among the officers are Seynabou Diouf from Senegal, who was selected as the 2019 United Nations Female Police Officer of the Year.

The UN was actually developed during the Cold War. In case of a conflict, the parties had to agree to a UN mission to prevent an escalation. Conflicts should be destabilised in this way. From 1948 to 1988 there was only one mission in Africa. This was based on a UN resolution from 1960 and lasted until 1964.

After the independence of the Democratic Republic of Congo, Belgians continued to occupy the ranks of the officers. This led to unrest in the country and the Belgians wanted to restore order with the 10 000 remaining military personnel. Many Belgians fled the Congo and the economy collapsed. By then, only 18 Congolese had obtained a university degree in Belgium up to independence in 1960.  The Belgians occupied the central positions in the administration and economy.  Secondly, the rich mining province of Katanga now split off under Moïse Tschombé and the protection of Belgian troops, a secessionist movement. The blue helmets replaced the Belgians. However, they did not do anything about the secessionist movement. The President of the Congo therefore turned to the Soviet Union. Lumumba probably did so for purely pragmatic reasons. The Congo thus became a pawn in the Cold War. As so often in Africa, raw materials are at stake. The Congo has substantial deposits of cobalt and uranium. Uranium in particular is of considerable strategic importance. For example, the uranium used to build the atomic bomb in the Manhattan Project against Nazi Germany came from the Shinkolobwe mine in Congo. Lumuba slipped into the role of the deadly enemy of the USA. In 1961 Lumumba was then murdered by the American secret service CIA. UN Secretary General Dag Hammarskjöld also crashed over the Congo.

In 1964 an uprising by the supporters of the country began in the east of the Congo. This was crushed by troops from the Congo, America and Belgium. The American Air Force and Belgian paratroopers were deployed. Even under the leadership of Che Guevara, the rebels in the surrounding area were unable to assert themselves. In the end, the various parties in the Congo managed to unite around the negotiating table. There were coups after the free elections, but the people feared a civil war too much so that the Congo could stabilise itself.

Comment: Besides the many rays of light in Africa, we now want to shed light on the murky stories and from time to time describe one of these terrible conflicts. We Germans have had and still have to deal with a difficult history. Now I will gradually try to describe the background of the UN missions in Africa.

In the recent past, too, there have been repeated armed conflicts in the presidential republic. The economy is heavily dependent on oil exports. 70 percent of people lack adequate food.

Tracing the climate of the past in East Africa